Aage Jenson had a dream to start a business to manufacture homes entirely of Cedar. He called it "PAN ABODE" ("Pan" ancient God of the forest + "Abode" meaning house, Pan's House), and in 1952 next to the waters on the Puget Sound, He opened his factory where he could draw from the most abundant Western Red Cedar resources available! "Cedar, the finest building material in the World".

At that time, 3x6 Cedar "Classic Timbers" were used to construct the cabin homes. The natural Cedar would be cut into timbers with great precision, specifically cut to the plan of each individual house, so each timber would fit into it's own place. "PAN ABODE" would be a building system that allowed the wood to adjust to its environment and settle into its new shape with great strength and solidity, like a piece of handmade furniture; preserving forever the natural qualities of a carefully chosen piece of wood.

In the 80's, PAN ABODE added the "Post & Beam" Building system that featured the advantages of conventional frame construction, with the ruggedness of Heavy Timber. The "Post & Beam" Building system became instantly popular for its diverse style ability, and its flexible nature to bring our Customers Dreams to life. Permanently melding the use of Cedar and Douglas-fir as PAN ABODE featured materials.

Our latest Building system to be added to the line up was introduced in the 90's to be more environmentally conscious. The "Phoenix Timber" Building System was invented by PAN ABODE to utilize Laminated Kiln-dried timbers joined in a corner post manner for ease of construction, and commonality to the now more involved structural codes. In 2000, we added the "D-Log Timber" profile to give our growing Customers the choice of a round log styled structure. PAN ABODE feels this product is more "environmentally conscience".

PAN ABODE has continued and thrived in the past and present to be progressive with its Building Systems, its System Technology, and Its industry leading attention to Detail and Service. PAN ABODE truly believes it is beautifying the World one Custom Cedar Home at a time! 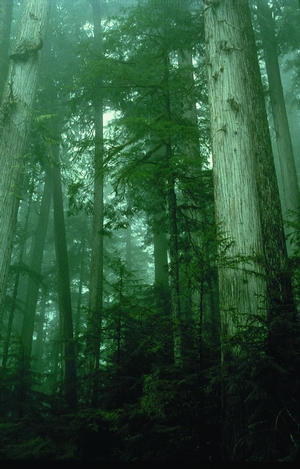 Western Red Cedar, "PAN" the ancient god of the forest, made his home "ABODE" of these majestic titans. 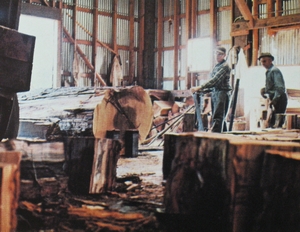 Back then, we sawed wood the old way!